Confession 282: Of Calla Lilies and Grace

The grace of our Lord was poured out on me abundantly, along with the faith and love that are in Christ Jesus.
1 Timothy 1:14 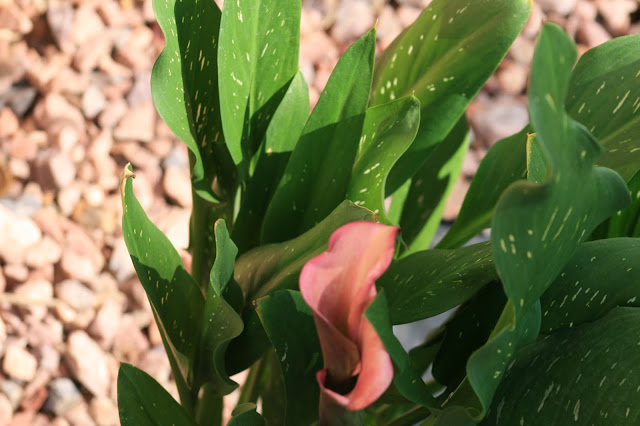 "The calla lilies are in bloom again" I hear Katherine Hepburn intone each time I step out my front door.  (For those of you who do not enjoy watching movies that were made before most of our parents were even born, that is a quote from a delightful 1930's film entitled, Stage Door.)  The calla lilies came up in late Spring and have been our beautiful, soft plum sentinels of summer.  I love them, and not just because I hear Katherine Hepburn every time I look at them.  For me, these calla lilies have become a symbol of God's magnificent grace.

My husband and I planted three pots of calla lilies a couple of years ago.  It was an impulse buy.  I had no idea whether or not they were native to Missouri, would thrive in our mostly sun-filled environment, or if I would remember to go out and water them regularly.  They were pretty, they were on sale, and I wanted them. 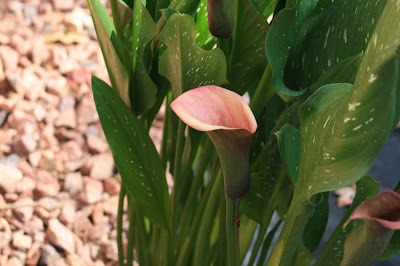 They did okay that first summer.  The leaves grew and we had one pretty little lily pop up by Fall.  I left them in the ground over the winter, not knowing there is anything else to do with plants, and didn't give them much thought until someone pointed out that calla lilies are supposed to be brought indoors for the winter.

Imagine my surprise, then, when my husband came in one day after work the next Spring and said, "You've got a lily coming up".  Indeed, I did--an astoundingly rich deep plum lily had fluted forth from the ground with no help at all from me.  I marveled at its beauty.  I'd never seen anything like it.

But then came the Drought.  Everything dried up, including my beautiful lily.  Our grass turned brown, weeds took over the garden, and I left it, not expecting anymore life to pop forth. 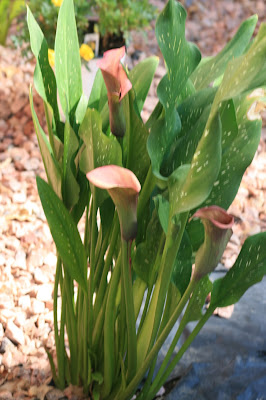 And so again, I was surprised when, late this Spring, THREE lilies opened themselves to our garden once more.  They weren't the rich deep plum of the previous summer, but a softer, paler sister.  They were also taller, and stronger than any of the lilies had been before.  And, as we approach the middle of August, those lovely ladies are still standing tall.

Looking at the lilies is a tangible reminder to me of God's grace.  Even when we feel we're done, God's grace comes pouring in giving us new life, new meaning, new purpose, and new strength.  God renews us over and over again.  More than that, God's grace transforms us.  We become a new creation.  And, like my lilies, God makes us stronger and more plentiful in each passing season.

The calla lilies are indeed in bloom again.  And as I watch them, I realize--so am I.

Blessings and Peace,
Sara
Posted by Sara at 3:53 PM