To humans belong the plans of the heart, but from the LORD comes the proper answer of the tongue.
Proverbs 16:1

My husband and I tend to be a little weird about Christmas.  Over the past several years, we have worked to bring more sacred and less commercial into our Christmas celebrations.  We don’t do a lot of retail Christmas shopping.  We don’t put our tree up until Advent officially begins.  We don’t put Baby Jesus in the Creche until Christmas Eve, and the Wisemen start out in another room and don’t reach the manger until Epiphany.  We also do not do Santa with our boys.  I KNOW….we sound like a couple of zealots.  But, it’s how we enjoy the season.  We’re not anti-Christmas, just anti-commercial.

That said, we had to have the “Christmas is not your birthday” talk with our boys last weekend as TV watching was becoming increasingly obnoxious with all of the “I wants” the toy commercials brought about.  We had a good discussion about the meaning of Christmas and decided that anytime anyone in our house had a case of the “I wants”, we would gently remind one another that, “Christmas is not your birthday.”  Note the phrase, in our house.  Apparently, we should have stressed that a bit more as later that same evening when asked at the local Christmas parade by a classmate’s mother if he would be going to see Santa later our oldest replied, “No. Christmas is not my birthday.”  Needless to say, she was a little taken aback. 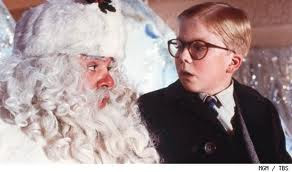 Afterward, over dinner, the boys wanted to know, “Is Santa real?”  Mmmm…. Where to begin?  I fell back on the old tried and true St. Nicholas story.  It was great, until our oldest who never misses anything asks, “Did St. Nicholas die?”  “Yes, honey, St. Nicholas died a long time ago, but people like to remember him by playing Santa Clause.”

Our youngest, who is four, was listening avidly to this entire exchange.  His brown eyes as big as saucers he burst out, “Santa’s DEAD?!”  In my head, I could already hear the angry calls from preschool parents all over town.  I beseechingly looked across at my husband.  HELP!!

My ever-so-rational husband responded, “No.  Santa was invented by a marketing company in the late 1800’s to sell toys.  What?” he asked, catching my look of annoyance.  “It’s true.”

In the meantime, our four year old came to his own conclusion.  “Santa’s in heaven with Jesus, Mommy.  That’s good—hmm, mmh.”  He makes a little “hmm-mmh” noise when he says something he’s really happy about.

In the end, we decided that Santa wasn’t real, St. Nicholas was in heaven with Jesus, people who love them will get them presents, and that they could absolutely, under no circumstances repeat any of that to anyone at school or church under penalty of losing all of their Star Wars toys.

And that was only November 24th.  It could be an interesting month.

Blessings and Peace,
Sara
Posted by Sara at 6:11 PM