Obey God’s message! Don’t fool yourselves by just listening to it. If you hear the message and don’t obey it, you are like people who stare at themselves in a mirror and forget what they look like as soon as they leave.  But you must never stop looking at the perfect law that sets you free. God will bless you in everything you do, if you listen and obey, and don’t just hear and forget.  James 1:22-25

Have you ever heard of the term active listening?  I remember talking about this quite a bit in my undergrad Interpersonal Communications course.  Active listening goes beyond simply hearing what someone has to say to being actively engaged with the speaker throughout the conversation.  It’s looking at someone while they’re speaking, making eye contact, nodding your head, giving verbal reinforcement and encouragement.  Active listening tells the speaker:

When we actively listen to someone, our actions demonstrate that we have received the message loud and clear.  Our response to what the speaker has said should reassure the speaker that she has been heard. 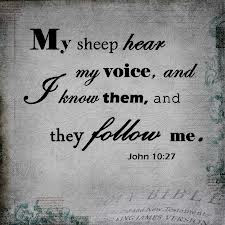 As the mother of two young boys, I truly appreciate the concept of active listening.  I’ve found that my boys can hear quite a lot.  For instance, they hear, “Go wash your hands and come to the table for dinner.”  But their continued playing or watching television five minutes after the fact tells me that they weren’t really listening.

Similarly, we can hear God calling us to something, but our response to that call will prove whether or not we were actively listening.

Take this story of King Saul for example:

In 1 Samuel 15, God sends Saul off on a conquering mission with specific instructions NOT to take any plunder from the attack.  Saul hears the Lord’s command, but does exactly the opposite.  Saul takes the plunder from the attack in order to “make a generous sacrifice to the Lord”, despite direct instruction that nothing should be saved.  Samuel, God’s prophet,  comes to Saul and asks him, “Why didn’t you listen to the Lord?”

Saul replies, “But, I did listen.”

Samuel then points out the overwhelming evidence to the contrary.  Saul tries to justify his actions, telling Samuel that the plunder was to be a thank offering to the Lord.  Samuel’s response:

“Tell me,” Samuel said. “Does the Lord really want sacrifices and offerings? No! He doesn’t want your sacrifices. He wants you to obey him.”
1st Samuel 15:22

When God calls us, He wants us to be active listeners.  He wants to see that He is important to us, that He is valued and respected above all things, and—He wants to know by our obedient response that we understand Him.

Blessings and Peace,
Sara
Posted by Sara at 3:26 PM